Operetta Foundation has produced seven concerts to date, beginning in 2003.  The goal of these concerts is to entertain audiences and bring beautiful, yet rarely performed and all-but-forgotten, music back to the stage.

A musical revue featuring your favorite songs – and a few lesser-known gems – from the Golden Age of Hollywood musicals, from their beginnings in the late 1920s through the early 1960s. Thrill to the tunes of George Gershwin, Cole Porter, Irving Berlin, Richard Rodgers, and others. The show features eight vocalists, a ten-piece orchestra, and a witty, sentimental storyline that will bring back memories of these tunes of a bygone era. 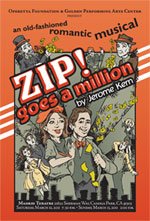 Based on the same novel as the 1985 film Brewster's Millions, this romantic musical by the father of modern American musical theatre traces the joys, romance, and tribulations of Monty Brewster, who has inherited $1 million from his grandfather and begun to live the high life. A lawyer appears with news that Monty's uncle—who detested the grandfather—has just passed away and left his nephew $7 million, but under the condition that, within a year, Monty dispose of the original $1 million. He accepts the challenge—as time passes, his loyal friends question his sanity, and his fiancée walks out on him. Finally, the year is up…. Kern's sparkling musical score contains some of Broadway's favorite tunes, including "Look for the Silver Lining," "Whippoorwill," and "Bill," which was reused some years later in Show Boat.

Wagner and Operetta: An Unlikely Pairing

Friends of Operetta devoted this quarterly meeting to the influence of Wagner and his works on operetta, musical theater, film, and popular song. A lecture and live recital featured selections from stage works including, among others, Die lustigen Nibelungen (The Merry Nibelungs) by Oscar Straus, The Magic Knight by Victor Herbert, Passionément by André Messager, and Le Carnaval des Revues by Jacques Offenbach.

Operetta International
Journey to The Center of The Mirth

Our fifth annual fall concert featured operetta songs from the six international centers—Paris, Vienna, London, New York, Berlin, Budapest—as well as from Spain, Russia, Italy, Greece, and the Yiddish theatre world of New York's Second Avenue. The concert followed two married couples, the closest of friends for years, who shared both a love for travel and perhaps more than just friendship. On their journey they played out their romantic intrigues through music from some of the greatest operettas from distant shores. The show was sung in English translation with piano and instrumental accompaniment.

What a Day!  What a Year!!  What a Life!!!
A Broadway Musical Revue in Song

Operetta Foundation presented its first joint production with Golden Performing Arts Center:  What a Day!  What a Year!!  What a Life!!!  This musical revue uses celebrated Broadway classics by Gershwin, Rodgers, Porter, Kern, Coward, Berlin, and others to tell the story of a woman as she looks back on a life filled with joy, sorrow, adventure, family, and her never ending quest for the man of her dreams.

This show was reprised …
Date: September 19 and 20, and October 3 and 4
Place: The Whitefire Theatre, Sherman Oaks

Operetta Foundation's 2006 show was a semi-staged version of Emmerich Kálmán's 1945 Broadway romance musical Marinka.  The show is based on one of history's most intriguing and tragic love stories; it is a retelling of the famous Mayerling incident, but with a happy ending replacing the infamous 1889 double suicide of Austrian Crown Prince Rudolph and his mistress, Maria Vetsera.  The show begins as youngsters at a movie palace decide that the Mayerling story that they have just seen on screen is too tragic.  Their bus driver, however, is the son of Rudolph's coachman and has his own take on the story.  Marinka ran for five months on Broadway, but had not been performed anywhere for more than 60 years.  This production featured the entire musical score, which glimmered with trademark Kálmán waltzes and csárdáses, as well as songs influenced by his time in America.  The hit tunes include “Only one touch of Vienna,” “Sigh by night,” “The cab song,” and the show-stopping “When I auditioned for the harem of the shah.”

Operetta: Saucy, Sultry, and Sentimental
A Musical and Theatrical Tribute to Franz Lehár

Our third presentation, Operetta: Saucy, Sultry, and Sentimental, A Musical and Theatrical Tribute to Franz Lehár was our contribution to the 100th birthday celebration of the composer’s Die lustige Witwe(The Merry Widow), which opened in Vienna, on December 30, 1905 and breathed new life into a musical form that the theatre world was already considering an out-of-date relic of the nineteenth century.  Lehár’s forty operettas contain some of the most beautiful, memorable, and haunting melodies, and are imbued with a sensuality that betrays his debt to Puccini.

The second concert was titled Delights of Early Broadway! A Musical and Theatrical Tribute to Victor Herbert, Rudolf Friml, Jerome Kern, and Sigmund Romberg and featured five singers and a pianist.  The concert celebrated the contributions of four theatrical giants who helped establish the American musical theatre tradition and paved the way for the likes of Richard Rodgers, Leonard Bernstein, and Lerner and Loewe.  Featured were songs and medleys from both familiar shows and those that have fallen undeservedly into theatrical oblivion.  The show was revived on July 29, 2005 as a gala evening presented by The Ohio Light Opera. 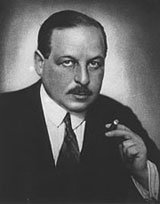 The first Operetta Foundation concert was Play Gypsies! Dance Gypsies! A Musical Tribute to Emmerich Kálmán.  Since his death a half century ago, Emmerich Kálmán still reigns supreme, with Johann Strauss and Franz Lehár, as the preeminent composer of Viennese operetta − but operetta with a distinct and irresistible blend of waltzes, jazz, and the gypsy and csárdás rhythms of his native Hungary.  The show offered songs and scenes, presented in a salon setting, from every one of the composer’s operettas.  It featured four operatically trained singers, an actor portraying Kálmán, and piano accompaniment.  The show was revived the following summer (July 30, 2004) by the Ohio Light Opera as part of its 25th anniversary gala season.